Where Is Starman And How Long Will The Tesla Roadster Last In Space?

Where Is Starman And How Long Will The Tesla Roadster Last In Space?

On February 6th 2018, the first Falcon Heavy (the world’s most powerful rocket) was launched into space with Elon Musk’s (CEO of Tesla) personal Tesla Roadster, with a spacesuit wearing dummy dubbed “Starman”. As of 9.45am on March 23rd 2018, the car is 171,344,236km from Mars, moving toward the planet at a speed of 60km/h.

How long will the Tesla Roadster last in space?

A year? A Century? A Millennia?

Scientists have started speculating over the answer and working out the effect that space will have on the components such as tyres, metal, leather, plastic and glass.

What is the Tesla Roadster?

The Tesla electric car is at the forefront of the electric vehicle movement and Elon Musk is also the CEO of Space X, a private aerospace manufacturer. Space X is also a space transport company with a variety of space vehicles, predominately their Falcon series.

The Tesla Roadster, is the quickest car in the world, with record setting acceleration, range and performance. The Roadster has left other super cars in the dust, going from 0 to 60mph in 1.9 seconds. It hasn’t yet been released in Australia, however pre-orders can be made currently.

“Tesla are at the forefront of clean transport and clean energy production, whether it be on our roads or in space” says Gino’s Director Aaron Scagliotta. “Everything that they do is worth taking note of.”

Why is Elon Musk exploring space?

SpaceX was founded in 2002 to revolutionize space technology, with the ultimate goal of enabling people to live on other planets. It is the only private company ever to return a spacecraft from low-Earth orbit, which it first accomplished in December 2010. The company made history again in May 2012 when its Dragon spacecraft delivered cargo to and from the International Space Station — a challenging feat previously accomplished only by governments. Since then Dragon has delivered cargo to and from the space station multiple times, providing regular cargo resupply missions for NASA.

So why send a Roadster?

The Tesla entrepreneur notes that rocket payloads for first test flights are generally just things that provide weight to simulate real cargo, like blocks of concrete or steel.

“I love the thought of a car drifting apparently endlessly through space and perhaps being discovered by an alien race millions of years in the future,” Musk said back in December 2017.

Musk wanted to do something more interesting, and even hinted on Twitter back in March 2017 that the payload would be ‘the silliest thing they could imagine.’ It was his own luxury Tesla roadster- hailed as an advertising home run and even referenced as a work of art. 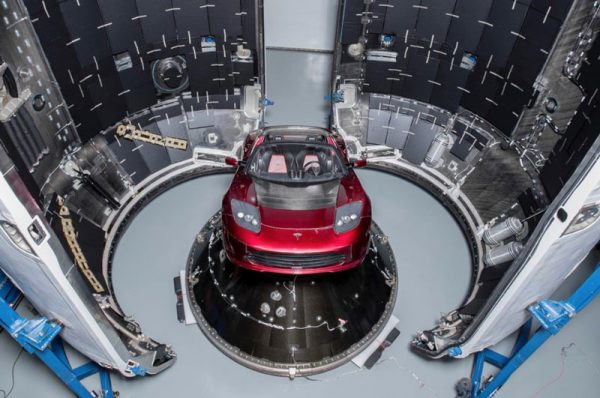 What will happen to the Roadster?

Musk had originally speculated that the car could drift in space for a billion years.

However, several scientists have stated that over time the vehicle will see structural damage due to radiation and impacts from asteroids. A few interesting facts about what will happen to the Roadster are:

The aluminium frame and glass (as long as not shattered by meteoroids) will be the only parts that remain! So, if in several centuries from now, the human race try to collect the Roadster, it will be recognisable. However it will likely fall to pieces or turn to dust when moved or placed in an environment with any gravity.

Unfortunately we have long lost any video footage of the Roadster, however rest assured that Starman is out there, and can be tracked using the ‘Where Is Starman‘ website.